Sunken Cheek: Causes & 9 Ways To Get Rid of Them 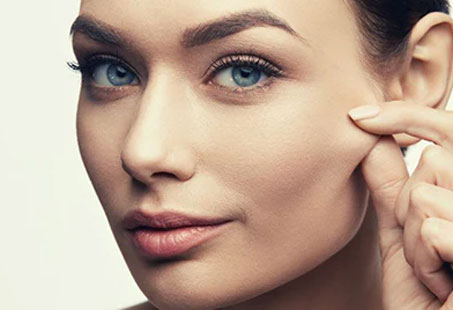 However, a sunken cheek can also be indicative of an underlying health problem or its treatment. Ageing is another fact that can make the bony structure of cheeks more prominent. Both men and women can have sunken cheeks.

You may have a sunken cheek due to one or more of the following reasons:

As mentioned above, ageing is one of the most common causes of sunken cheeks. According to Scientific American, after you turn 20, you’ll produce 1% less collagen each year. And collagen is the protein that gives the skin its characteristic firmness, plumpness, and elasticity.

Older people are also not able to get enough protein in their diet because it is difficult for their bodies to process it. This collagen depletion is one reason for a sunken appearance. However, with age, the fat pads beneath the skin also degrade or migrate downwards, leaving you with sagging and hollow cheeks.

There are certain health conditions that can directly or indirectly give you a sunken cheek. These are as follows:

Malnutrition can be one reason why you have sunken cheeks. The body burns down fat if there are no carbohydrate reserves in the body. This can happen in case of starvation. Other than that, the kind of food you eat also matters. Sugar can age you. It can result in the deterioration of collagen and elastin in the skin, which can also cause hollowing of the cheeks.

Certain things that you do can also leave you with a sunken cheek. Smoking, for instance, breaks down collagen in the skin, leaving the skin wrinkled and sagging. The motions involved in the smoking of a cigarette further exacerbate this problem.

If you exercise too much, you can end up with what’s known as a “gym face.” It is marked by sunken cheeks and hollows underneath the eyes. Sleep deprivation can also give you gaunt, hollow cheeks.

If the weather conditions are too harsh, your skin might not be able to retain moisture in it. The skin also becomes dry and less elastic, which can make the cheeks look more sunken.

One of the biggest environmental factors that affect the skin is the sun. Prolonged exposure to UV radiation can break down the collagen in the skin quicker than normal. It also impacts how quickly the facial fat degrades. Therefore, your face can look much thinner as a result of sun damage.

How To Get Rid of Sunken Cheeks Without Surgery?

You can undergo the following procedures to get rid of a sunken cheek, but without surgery:

Hyaluronic acid (HA) dermal fillers are popularly used for plumping the cheeks and getting rid of different signs of ageing. The filler also helps stimulate collagen production by the body, which can further help the cheeks look fuller. The procedure takes less than 20 minutes. However, keep in mind that its results are temporary. They can last from anywhere between 6 months to 2 years.

A vampire facelift uses platelet-rich plasma (PRP) and micro-needling to boost collagen production and make the skin plumper. The blood will be drawn from your arm, which is then put into a centrifuge to obtain the PRP. It is also possible to combine PRP with hyaluronic acid fillers for a vampire facelift. Both can help make the cheeks look less sunken.

Profhilo is another non-surgical procedure that uses hyaluronic acid for plumping up the skin. And it stimulates collagen production. It is injected around the whole face, unlike a dermal filler which specifically targets a particular area of the face for a greater volumizing effect. Its results are not as dramatic as fillers, but they can help in mild cases.

According to a study published in the Annals of Dermatology, the oral intake of aloe vera gel can improve the elasticity of the skin, increase the production of collagen, and make wrinkles less prominent. The participants in the study took aloe vera supplements for 90 days to see results. By stimulating the production of collagen, aloe vera can make the skin firmer by restoring volume. This can also help make the cheeks look less gaunt.

Research shows that facial exercise can improve the appearance of the skin. The most common exercise involves filling the mouth with air. This can help tone the facial muscles, which can give more volume to your cheeks. However, keep in mind that these exercises can also burn fat. You can end up with the “gym face” mentioned above. So, you should be more careful about doing this.

How To Get Rid of Sunken Cheeks With Surgery?

You can undergo the following surgical procedures for plumper cheeks:

It is a surgical procedure in which fat is taken from different parts of the body such as the abdomen, thighs or buttocks through liposuction. This fat is then purified, processed, and then transferred to the face.

General anaesthesia is used for this procedure so that you do not experience any pain. Some of the fat will be absorbed by the body, but the surgeon will take that into account before transferring it so you can get your desired result. Keep in mind that you’ll have swelling, bruising, pain and redness temporarily. But it will subside, and you can enjoy the results for years.

Cheek implants are another way through which you can get rid of sunken cheeks. Silicon implants are inserted into the face through incisions either inside the mouth or beneath the lower eyelids.

Through this surgery, you’ll notice a significant increase in the volume of the cheeks. These implants are permanent and can last for a lifetime. However, if you’re not satisfied with the results, you can get them replaced or removed. This surgery will also leave you with temporary swelling and bruising, but it will go away.

How You Can Prevent Sunken Cheeks?

You can prevent a sunken cheek from developing by doing the following:

Doing these things will help you maintain facial volume even as you age.

Sunken cheeks can make you look older than you really are. There are different reasons why that can happen. You can get surgical and nonsurgical treatments to get rid of them. However, if you have them, it’s best to first consult a doctor to get an accurate diagnosis.In some people, a sunken cheek can make a face look sculpted and slimmer. It is considered attractive. However, the effect isn’t always the same. A sunken cheek can make a person look aged and ill. That’s why many people look for ways to make their cheeks plumper and fuller through surgical or non-surgical measures.

It should be noted that a sunken cheek is an inevitable part of ageing. Because of the anatomical changes in the skin, it will become gaunt. But there are other factors that can make the underlying bone structure more prominent, making the cheeks look more hollow. But before that, you should understand what’s characterised as a “sunken” cheek.

What Does Sunken Cheeks Mean?

A sunken cheek lacks enough tissue between the zygoma (bony arch of cheek) and mandible (lower jaw). It can make the sides of the face appear hollow and gaunt. Most commonly, it is a result of the ageing process, where the degradation of collagen and fat pads causes the cheeks to sink.